The Climb In Leonidio team is pleased to invite you to the 3rd Leonidio Climbing Festival, which will take place on November 1-4, 2018, in Leonidio, Greece. The event is organized by the Region of Peloponnese and the Municipality of South Kynouria, and sponsored by Petzl, whose mission is “to create innovative tools and services that allow men and women to progress, to position, and protect themselves in vertical environments, as well as to light their way in the dark.”
Just a three-hour drive south of Athens, Leonidio has established itself as one of the best climbing destinations in Europe. Many of you have visited our beautiful village and experienced its stunning cliffs. Currently there are more than 1400 routes across a wide range of grades, and there is still potential for many more. The aim of this ambitious venture is to promote climbing by encouraging people from all over the world to spread the news regarding the beauty and endless climbing possibilities of the area!
The festival’s special guest this year is Angela Eiter, one of the best female competition climbers of all time, and the first woman ever to climb 9b (5.15b) with her historic free ascent of La Planta de Shiva 9b in Spain in 2017. But she is also a force to be reckoned with in competitions, where she has won three Lead Climbing World Cups in a row, four World Championships, and dozens of other victories and distinctions. Leonidio is very close to Angy’s heart, as she has shown time and time again, having climbed and bolted routes here in recent years. Also joining the festival are Petzl team athletes Klemen Bečan and Said Belhaj, who will bring their distinct climbing styles, vast experience, and fascinating perspectives to the Red Rock of Leonidio. The whole community is ready to welcome these exceptional athletes with open arms!
Additionally, Vertical Life is bringing back events like the Open Climbing Challenge and everyone’s favorite Zlagboard contest. Other fun activities to look forward to include free yoga and climbing courses, film screenings, presentations, live music, raffles with generous prizes, and a reprise of last year’s awesome Saturday night party. Non-climbing events will take place at the Fabbrica of Culture, a gem of a venue in the center of town. Once again, all events will be photographed, filmed, and reported on by top professionals from the climbing media.
We look very forward to seeing you again this year.
Repost and share with your friends!
Further info:
www.climbinleonidio.com 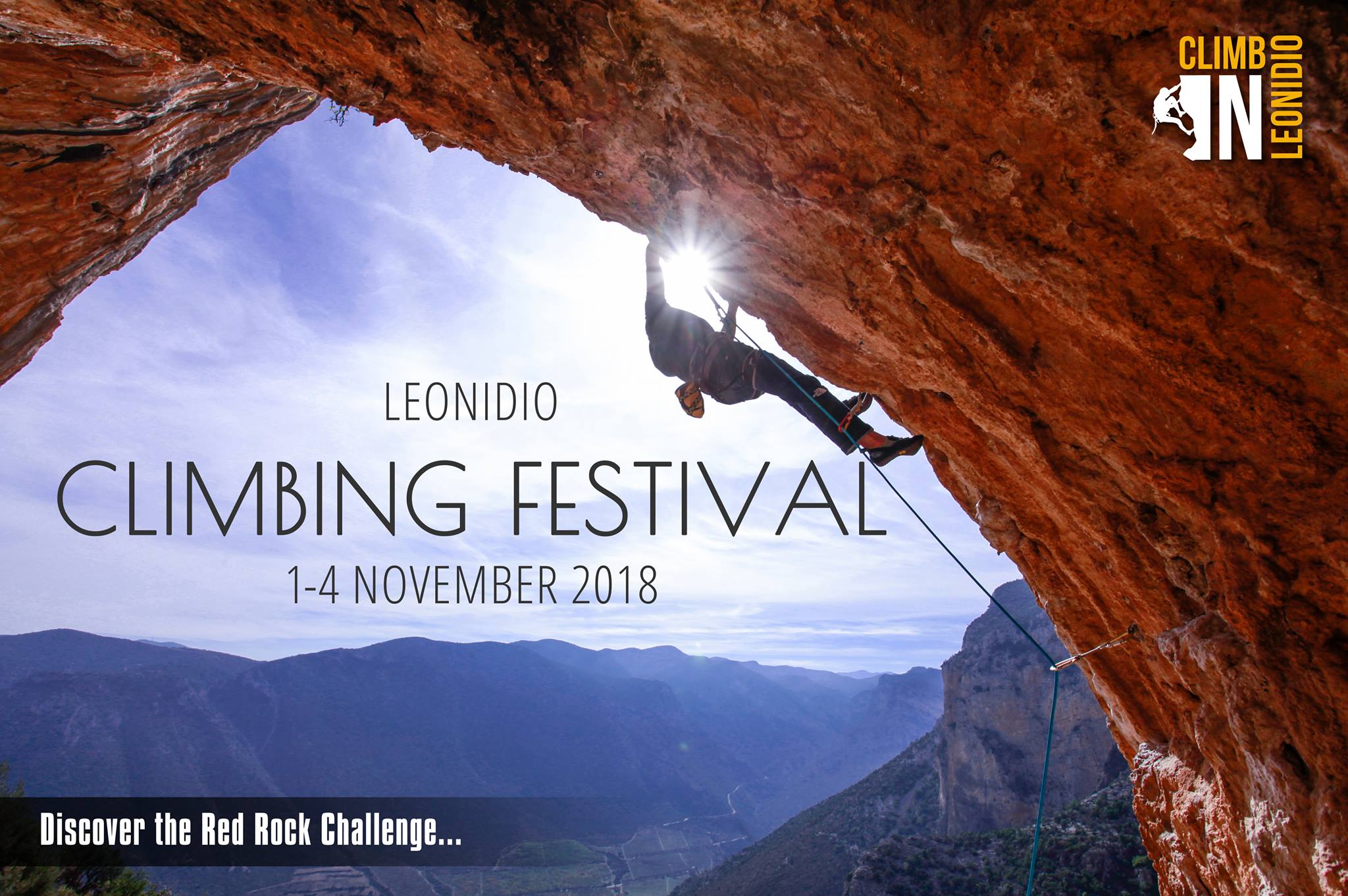 For the third year in a row, we are excited to invite you to the Climbing Festival, which will take place on November 1-4, 2018 in Leonidio.
The 3rd Leonidio Climbing Festival will be part of a collaborative effort to promote the Leonidio Climbing Park and alternative tourism, showcase the region’s stunning natural beauty, and spread the word about its potential to a worldwide climbing audience.
Visit the official  website to find out all the details and the activities that will be organised.
Stay tuned for more information, and don’t forget to book your Leonidio Apartment in time!

It’s been an incredible time here in Leonidio! I’ve spent a great week here, met cool people, climbed amazing routes and projects and was part of an uprising climbing festival which will hopefully happen many more times!

@alexandermegos is saying thank you and which this post my take over of this Instagram account is unfortunately already over! I had a good time! Hope to see you again next year! 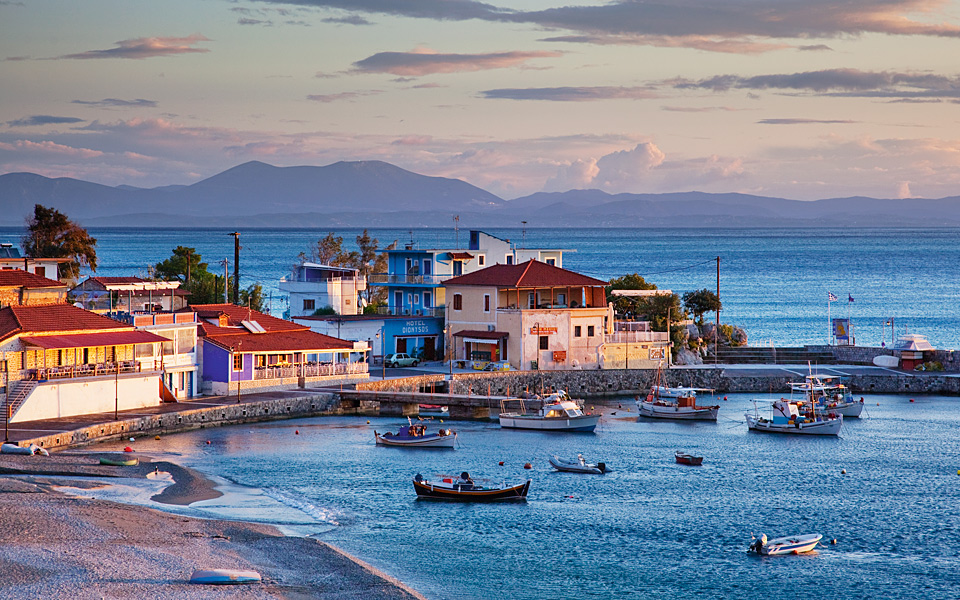 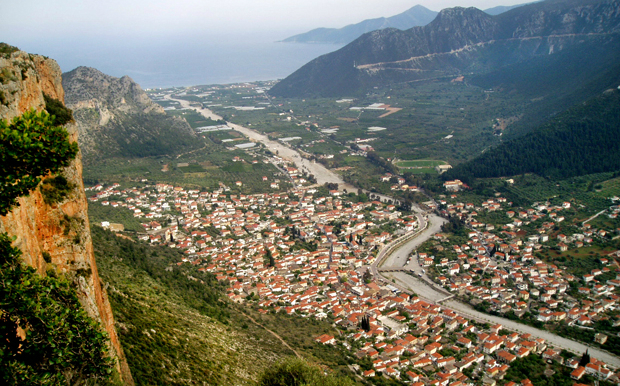 The distance from Athens to Leonidio is 210km. It will take about three hours by car on the Athens-Tripoli highway. Look out for signs for Argos and then follow the signs towards Astros and Leonidio.
It will take a little bit longer by bus: The journey takes about four hours. There are daily departures from Kifissos (8:15am and 4:00pm). One way tickets cost 20.30€ (return tickets cost 39.00€). When planning the trip, you should know that Kifissos is not by the airport. You will have to take a bus from the airport to Kifissos and then get your connection to Leonidio.
Leonidio, the capital of Tsakonia has a unique position. Surrounded by mountains and next to the sea it enjoys a cool breeze from the Myrtoon Sea and is blessed with the beautiful nature of the Parnonas mountains.
The final turn that takes you away from the long and winding coastal road towards the town of Leonidio is already impressing. A large and fertile plain extends from the sea to the town, with an abundance of vegetables, olives, citrus fruits and other fruit trees. Leonidio is famous for the Tsakonian eggplant, which is smaller than the ordinary eggplant and has a light purple colour with white stripes. It tastes sweeter and its flesh is more tender.
The inscription “”Kaur Ekoquate”” welcomes us in the Tsakonian dialect on the way towards the centre. The Tsakonian dialect has roots in the Doric language and is still spoken in this part of Greece.
The town itself lies about 4km away from the sea, nested between the mountains. Leonidio is characterized as a traditional settlement with historically preserved monuments, mansions and towers measuring several centuries of life.
However, the most characteristic image is the reddish rock (Kokkinovrachos), which rises above the settlement and is more than 250m high.

The sea and the mountains
Even though Leonidio is a coastal settlement, it is not exactly next to the sea. Plaka, the port of Leonidio is 4km away from the centre. 9km from Leonidio you will find Poulithra, a beautiful coastal village, which invites you for a stroll on the fine pebbled beach or through the upper neighbourhood, with its mansions and a breath-taking view over the Myrtoon Sea. 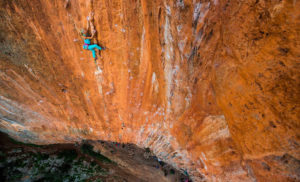 In recent years, Leonidio has welcomed not only its traditional visitors, who arrive during Easter, or the summer months, but also a different audience.
Look carefully at Kokkinovrachos during the cooler months of the year and you will immediately understand what we mean. You will spot many climbers who have discovered Leonidio in recent years and who, with much commitment to their work, are constantly opening tracks of all degrees of difficulty. Leonidio is the hot spot in Greece right now, attracting not only many foreign visitors, but also many climbing fans from Greece.
Leonidio has established itself as a rising climbing destination, especially during the winter months. The characteristics of the Leonidio Climbing Park, in addition to favourable climatic conditions, lie in the variety of routes in terms of: the degree of difficulty, the incline of the climbing rock, the length of the routes, brightness and variety.
Leonidio’s heart beats for the climbers. The infrastructure is set to have all amenities in a town. Bakeries, restaurants, camp grounds, rental homes and rooms, wonderful beaches, gasoline station and ATMs makes sure you don’t want to leave this town. The locals are friendly and kind, they appreciate the climbers who are the more off-season tourist in the area which provides an extra source of income in winter.
Our climber friend Coco, can help you with the perfect gift for a rock climber made in sterling silver. See more here: http://cococlimbingjewelry.com/

“”Walk4fun”” organizes tours for everyone: you can choose between shorter, longer hikes or crossings of the Parnonas. You will find the program for each month on www.walk4fun.gr.

THE BEST BREAD IN THE VILLAGE is at Vlamis Bakery – https://www.facebook.com/Vlamis-Wood-Bakery-1748116372138692/
Climber or not – pass by the Panjika Cooperative for coffee, beer, delicious homemade food and sweets. This is one of the places in Leonidio where you can connect with fellow climbers, exchange experience and relax. 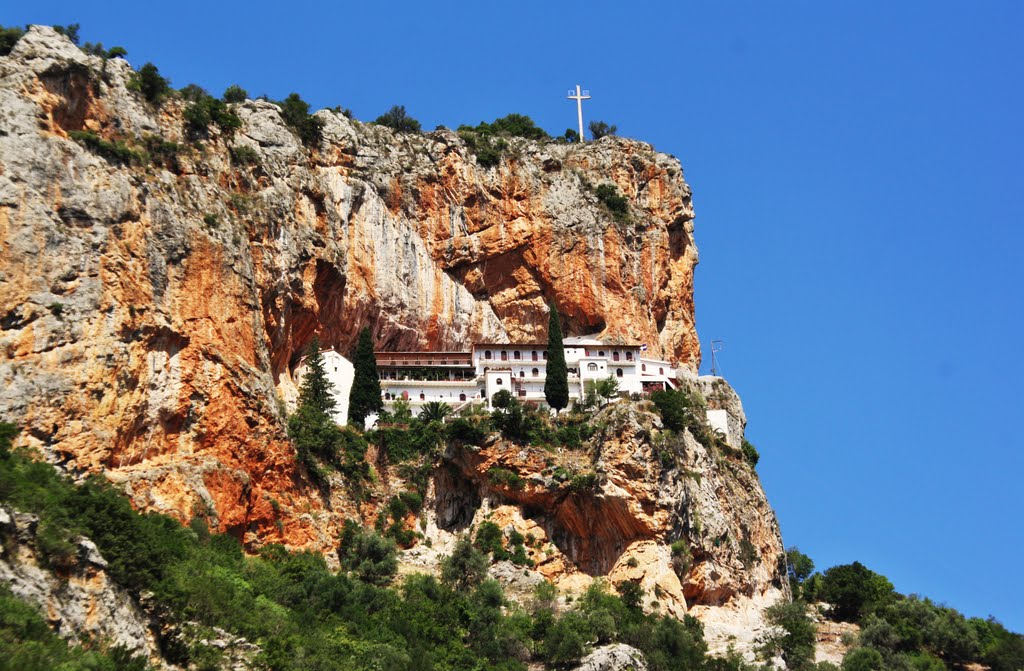 The Monastery of Elona

A gigantic steep cliff of the imposing Mount Parnon, with a reddish color, extremely difficult to access, with the shape of a pair of jaws. with the Monastery of Elona in the place of the rows of teeth. Yes, that is the scene before which the visitor or pilgrim will be amazed, that is, how people managed not only to arrive there, but even to build and live there for years that are far – very far – from our time!
It is said, then, by testimony from 1873 and 1901, the “”Pilgrimage Site of the Holy Monastery of Elona”” and “”The History of the Holy Monastery of Elona”” respectively, that the inhabitants of Kosmas at that time saw the icon shining brightly on the cliff. Two anonymous monks climbed and behold the miracle today! It is an icon “”sent by God””, that depicts the Virgin Mary holding the baby Jesus!
To reach the monastery form Leonidio it will take about 17 km. The visitor, without any further danger, will find himself at the “”hanging balcony”” between the earth and the sky! 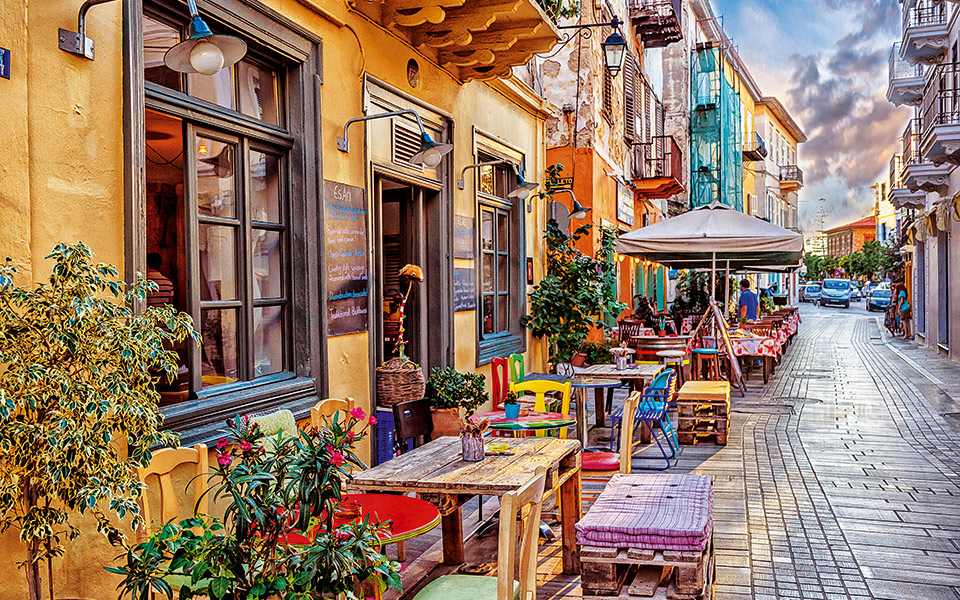 Nafplio (Modern Greek: Ναύπλιο) is a seaport town in the Peloponnese in Greece that has expanded up the hillsides near the north end of the Argolic Gulf. The town was an important seaport held under a succession of royal houses in the Middle Ages as part of the lordship of Argos and Nauplia, held initially by the de la Roche following the Fourth Crusade before coming under the Republic of Venice and, lastly, the Ottoman Empire. The town was the capital of the First Hellenic Republic and of the Kingdom of Greece, from the start of the Greek Revolution in 1821 until 1834. Nafplio is now the capital of the regional unit of Argolis. 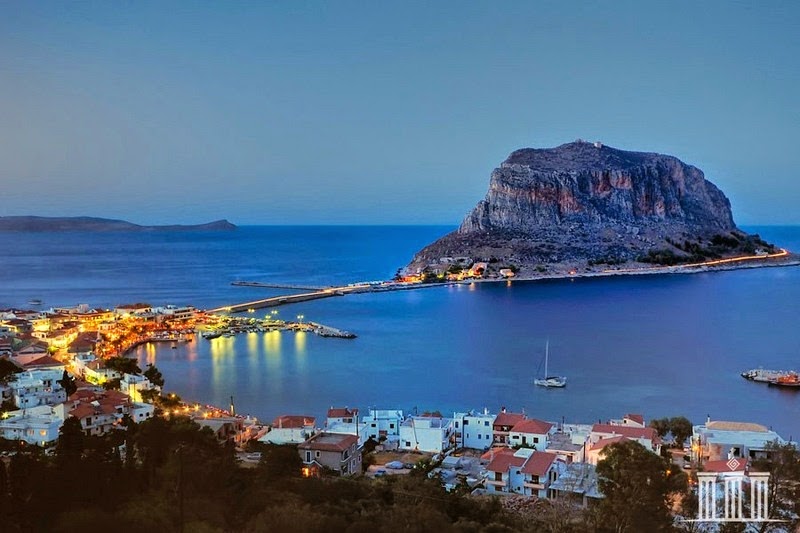 Monemvasiá, founded by the Byzantines in the sixth century, is a breathtaking medieval tower town located on the south-eastern coast of the Peloponnese.
Take the opportunity to explore this mystical stone-built settlement, nestled at the edge of a big rock by the sea, and immerse yourself in a unique medieval atmosphere!

Day trip to Spetes and Hydra

Spetses, an island boasting a long naval tradition, is famous for its significant contribution to the 1821 War of Independence. It was here that the revolution flag was raised on 3rd April 1821. The island has managed to retain its individual traditional character thanks to its well-preserved grand captain mansions, still bearing eloquent witness to the island’s glorious past. The picturesque old harbour and Dápia, a tourist and commercial centre where the heart of the island’s entertainment beats, are the trademarks of the town of Spetses.
Hydra, built in the shape of an amphitheatre on a slope overlooking the Argosaronic gulf, is one of the most romantic destinations in Greece. Traditional stone mansions, narrow cobblestoned streets, secluded squares and above all the banning of cars and the use of around 500 donkeys as means of public transportation, explain the reason why Hydra preserved its distinctive atmosphere through the passage of time. “